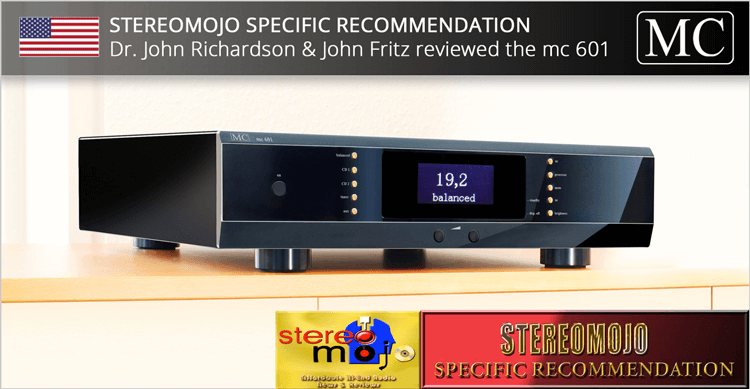 Achtung audiophiles! Want a taste of German engineering, performance, and build quality at a down-to-earth price?  Then check out the offerings by Music Culture Technology, among which is the MC 601 solid-state preamplifier.  The MC 601 is a truly lovely performer on all counts and a real looker in the audio rack. For the audiophile and music lover alike, it absolutely deserves your attention and audition.

...Music Culture Technology offers a complete system dubbed the Elegance line of which this preamplifier is an integral part.  I initially wondered if the MC 601 was voiced as part of system and would be somewhat idiosyncratic when inserted into a “foreign” system.  This was not the case as my listening sessions revealed.  The MC 601 lends little character to the sound of system, so you can hear, for example, the differences in cables, while at the same time the music flows freely without highlighting deficiencies in a recording or component.

Music Culture Technology has successfully balanced resolution and musicality to produce a preamp that does not sound like tubes or solid state, but in its unique way does justice to the music.  At its price point the MC 601 is a flat out bargain.  It competes with costlier preamps, both tube and solid state.  Whether you fall into the tube or solid state camp, do not hesitate to give the MC 601 an audition, preferably in your own system. You may, like me, be won over with its intrinsic musicality, classy looks and quality German craftsmanship...

This website uses cookies to improve your experience.<br /> We'll assume you're ok with this, but you can opt-out if you wish.